Children at a school in Ghana will no longer have to walk miles for food thanks to a donation of 60 bicycles from Marlborough residents.

The bikes will be given to pupils at Karbo Primary School, Lawra, in the north west of Ghana, via the Ramsbury-based charity Action Through Enterprise.  A plea for the bikes was put on Facebook by Sue Brady, who owns Sue Brady Catering in Marlborough Business Park, after she discovered what lengths the pupils had to go to get their school lunches.

She said: “We sponsor eight children for free school meals every day and when I found out they had to walk for miles to get to school I thought ‘let’s get some bikes out to them.’ “I put it on Facebook in the summer and I was so surprised at the response. We didn’t just get bikes; we got books, tennis rackets and football boots. 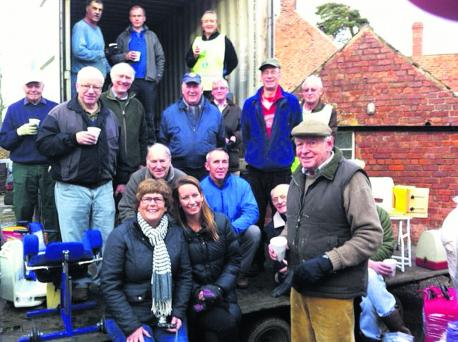 “We also raised the money to get the container over to Ghana. “We held cake sales which raised £500 and we held a race night which raised £2,300.”  Mrs Brady took the bikes to Yorkshire in October where they were fixed up by the Hull and Liverpool prison service.

On December 14 she returned to Yorkshire with Sarah Gardner, operations director of Action Through Enterprise, to load the bikes onto the container. Also loaded onto the container was entire contents of a former Yorkshire independent school and a consignment of children’s physiotherapy equipment, wheelchairs and mobility items donated by North Yorkshire charity PhysioNet.

Miss Gardner said: “The average child has to walk 45 minutes to school, so we’ll be giving the bikes to the children that have to walk the furthest. “Receiving this equipment will be life-changing , especially the school equipment, books and wheelchairs. “The children who need them have literally been lying on the floor.”  Miss Gardner flew out to Ghana on Friday and will be there to pick up the equipment when it arrives in mid-January.

To find out more about the charity, visit ateghana.org

“It all started 17 Years ago when I was asked to help at a charity ball to raise money for a local playgroup playground.”

Somewhere on the high seas between Felixstowe and Ghana there’s a ship with a 40 foot container filled with bicycles, medical equipment and most of a defunct preparatory school. The container ship is expected to dock in Accra on about January 23 and the container will then continue its journey by truck to a school in the remote northern area of Lawra. There to meet it will be Sarah Gardner, founder of the Ramsbury-based charity Action Through Enterprise (ATE) which runs a number of development and educational schemes in the rural upper west region of Ghana.

How a load of bikes from Marlborough, wheelchairs and a defunct prep school will help children in Ghana

Reproduced with the kind permission of marlboughnewsonline.co.uk

The container’s journey began when Sue Brady who runs Sue Brady Catering from Marlborough’s Salisbury Road Business Park had an idea how she could help ATE’s work. Sue, who lives in Burbage, has been running her catering company for 13 years. She provides food for many kinds of events and three-quarters of her business is supplying daily school meals for 16 local schools.

Sue’s link to ATE came through one of her key members of staff, Laura Ellison-Snook who is a long-term friend of Sarah Gardner. And one of Sarah’s first aims for ATE was very close to Sue Brady’s expertise in school meals.  Sarah, who is a trained primary teacher, wanted to feed the children who came to the Lawra school she had taught at as a VSO worker.  They were often near to starvation and providing a meal would get more children to attend school in the vital early years. 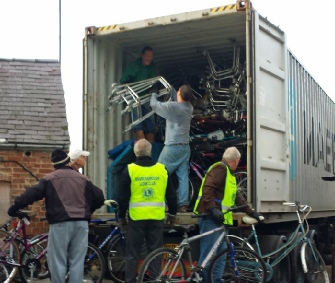 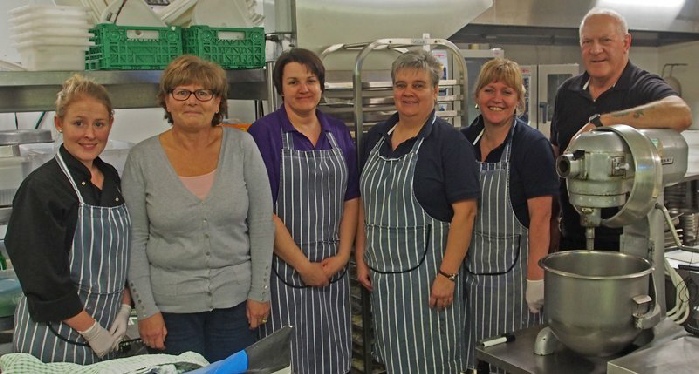 As Sue told Marlborough News Online: “If we could feed about 660 schoolchildren a day in the Marlborough area, we could do something for the schoolchildren Sarah’s charity was  helping in Lawra.” Sue Brady started with a personal monthly donation to provide eight Lawra children with daily school meals: “Then I discovered most of the children were having to walk miles and miles to the school.  The answer had to be bicycles.”

Sue started collecting old and no longer used bicycles – and raising money to get them to Lawra:  “People around Marlborough were great – hunting out unused bikes from garden sheds and so on – some almost new other not at all new.” Two cake sales and a ‘race night’ in Great Bedwyn raised  £3,200 – enough to send a 20 foot container of bicycles on its way to Ghana. The story of this container involves determination and a happy touch of serendipity: 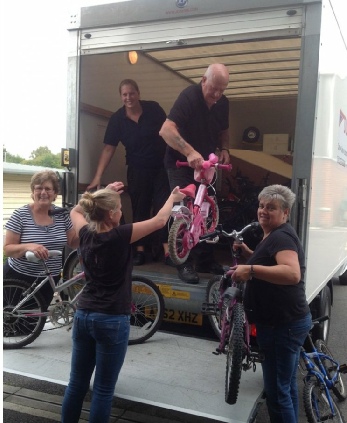 Sarah also wanted to find a source for re-conditioned wheelchairs and medical aids for Lawra’s many young disabled.  She contacted Peter Thompson of the Yorkshire-based charity PhysioNet.  He came up with wheelchairs, walking frames and other medical equipment which had been reconditioned by prisoners in Hull and Liverpool.  The prisoners, said Peter, could make Sue’s bicycles – now up to sixty machines of various sizes – almost like new again. 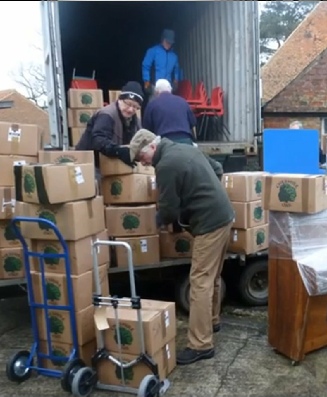 So prep school tables and chairs will find a good and useful home.  ATE does not only carry out educational work in Lawra - but the school children did start Sarah thinking how she could help.  ATE's basic work is its pioneering enterprise schemes.

They also found room for 30 Roll-Along Water Barrels which will ease the physical burden of the daily trip to the well and cuts the dangers of contamination.

These ingenious 30-litre easily sealed barrels with handles and rubber ‘tyres’ are produced by the charity Roll Out the Barrel. 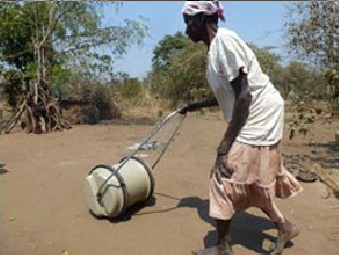 There will be great relief and some celebration for Sue and her staff at Sue Brady Catering when news comes through that the container has arrived safely in Lawra: “I just want to say thank you to the people of Marlborough who donated so much and made this happen. 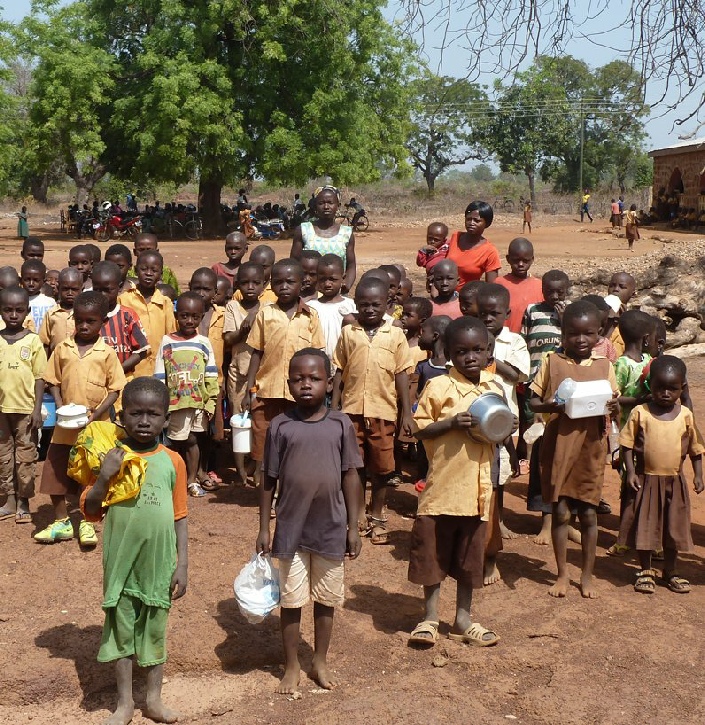 So Sue and some of her staff loaded the bicycles into a van and she and her husband drove it up to PhysioNet’s North Yorkshire headquarters. But Peter Thompson had another surprise in store: a northern preparatory school had gone bust last summer and wanted all its books, furniture and equipment to be put to good use.  The school wants to remain anonymous. Just about the school’s entire stock of books, paper, tables, chairs and playground equipment were prepared for the voyage to Ghana.  Lawra will even be getting the school’s upright piano - packed in among lots of sundry sports equipment which has been augmented by dozens of new footballs.  At the moment ATE is building a kindergarten for 96 children in Lawra.  As Sarah puts it: “They’re learning in a cupboard at the moment.”

Sue Brady  (2nd from left) and her staff.  Laura is on her right.

The bikes on their way to Yorkshire

The piano waits to be loaded

A roll-along water barrel in use